Liquid nitriding is a subcritical surface enhancement process with one of the longest track records of success of any case hardening technology.

HEF bushings are recognized worldwide for their excellent frictional and anti-seizure properties, and ability to withstand high loads.

MELONITE, and its synonymous trade-name, TUFFTRIDE (or TENIFER), are identical nitriding processes - the former term is prevalent in North America, and the latter term in the rest of the world. The chemicals/salts utilized for the MELONITE are different than the ones utilized for Arcor - the former process predates the latter and both are registered trademarks of HEF Group. The compound layer metallurgical properties of components treated using the MELONITE and the Arcor process are by-and-large equivalent for most applications

The MELONITE process also begins with the placement of parts in a re-circulating air preheat furnace, followed by immersion for 60-240 minutes in a molten nitrogen-rich MELONITE specific salt solution contained in an aerated furnace. After nitriding, parts are treated in an oxidizing bath, water-cooled and rinsed. An optional impregnation step can be implemented post-nitriding - if added corrosion protection is required.

“QPQ” stands for “Quench-Polish-Quench”, which describes a sequence of secondary steps following the liquid nitriding step. These steps entail the sequence: (1) Oxidation: 2-3 microns of the surface layer is transformed to an iron oxide. This is done by immersing the parts in specially formulated 'salts' between 400°C - 425°C (750°F -800°F); (2) Polishing: to improve surface finish and (3) Re-oxidation: to recover the oxide layer thickness that may have been lost during the polishing step. QPQ is prescribed when a smooth surface finish and maximum corrosion protection are required.

For many applications, this finishing process provides a surface condition that protects against corrosion and wear superior than hard chrome or nickel plating.

How It Works: Treatment Cycle 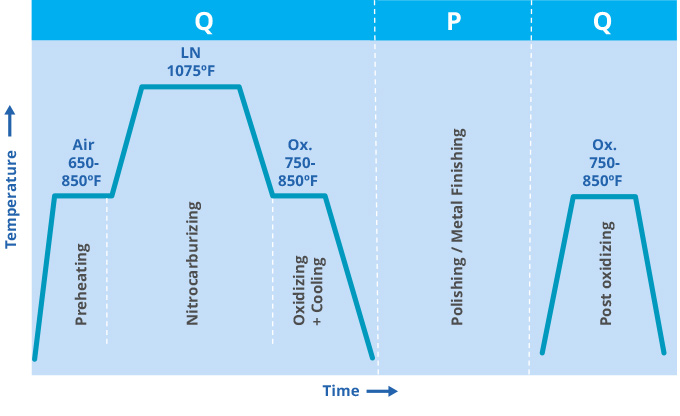